Hades is a beautiful collection of intricately designed shoes made not only with elegance but a dangerously addictive sex appeal. Originally launched in 2010 as the brand Metropolis, Hades has grown into a well acknowledged designer and manufacturer of provocative heels and sexy footwear with a touch of alternative and designer taste that hasn’t been seen in our new generation of fashion, yet exploding worldwide in popularity. Their shoes have been requested in numerous photo shoots, cat walks, TV shows and even celebrity events! As a strong promoter of individuality rather than conformity, we have put renowned designers and shoemakers together to form one of the most beautiful collections of shoes, each design having its own story and craftsmanship that is sure to make heads turn. We are now honored and proud to present to you our newest collections!

We support vegan lifestyle, we do not use animal skin, fur, glue, leather or anything associated with the harm of animals. We have an advantage above other shoe brands like our competitors Demonia and New Rock, because they market some styles as Vegan also but they also have other styles that are made of leather. So they cannot claim to be a “vegan brand”, but rather some of their styles are vegan. 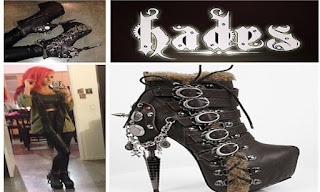 Posted by Leather and Heels at 10:31 AM No comments: 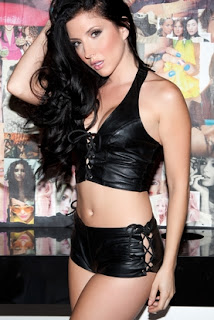 For all the men out there wondering what to buy their wives or girlfriends for a special occasion—or no occasion at all—consider leather your new best friend. If you are still skeptical, find any piece of leather and put it on your bare skin. Now, doesn't that feel better than itchy lace or scratchy netting? Any concerns you may have will fly out the window. Keep in mind that there are a wide variety of leather styles, so you can find one that will make your lady love the most comfortable. If a leather thong and string bikini is a bit too adventurous, consider a buttery soft pair of leather hot pants or a corset top to provide more coverage. If your woman's closet is overflowing with leather delights, consider clever leather accessories that will allow her to complete the look.
Posted by Leather and Heels at 5:17 PM No comments: